Itekube-7 is a touch gesture dataset of interaction gestures defined for a sequential classification task. Unlike symbolic gestures, whose features are solely spatial, interaction gestures require both spatial and temporal analysis to define them properly. The seven classes of the dataset were chosen for their versatility and in specific cases strong correlations.

This dataset was created with variability in mind at every step: 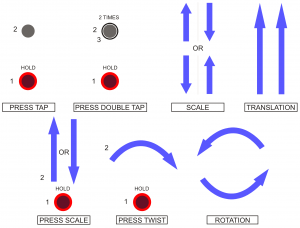 Each gesture was saved as an individual xml file, containing the gesture class and the participant id as metadata, and a series of (x,y,t) contacts.

You can download the dataset in two formats. The raw version, an archive containing all files:

We also propose a script example in Python in order to make training and testing TFRecords from the raw dataset. Even if you are not working with Tensorflow, the methods in this script should help you make your own parser.

or ready-to-use TFRecords where gestures were sampled to 10 points using our dynamic sampling. A TFRecord example possess 2 int64 features, « framecount » and « label », and a feature list « positions » to be resized to a [3,10,2] tensor.

If you use this dataset, you will be required to reference this paper: